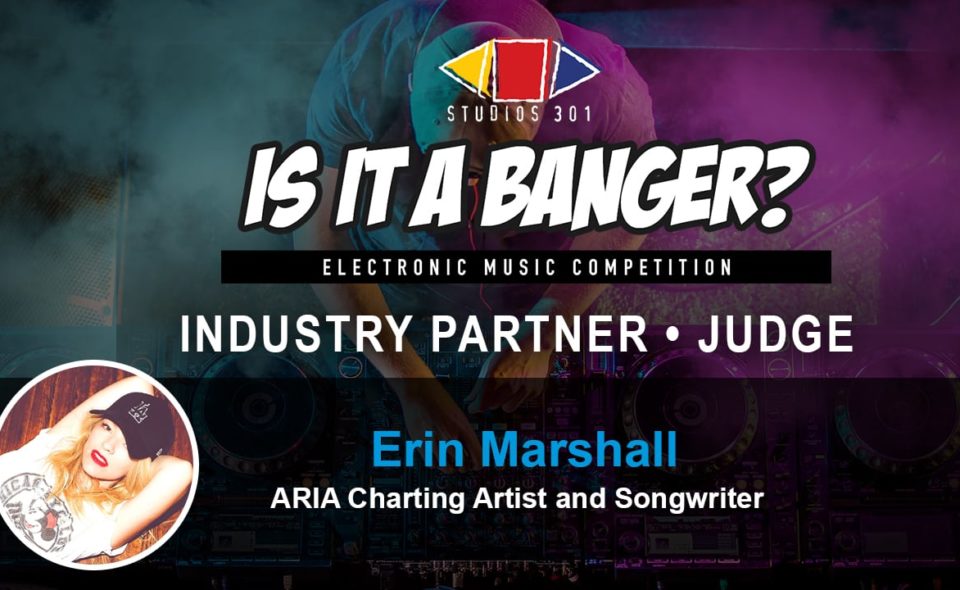 The Studios 301 IS IT A BANGER? Electronic Music Competition is back for 2017! Since we’ve gone straight to the source this year and enlisted some of the industry’s most respected names as part of our ultimate prize package, we thought we’d give you the opportunity to get to know them a little better.

Our winners this year will be heading into the studio to collaborate with Erin and producer Chris Arnott. Erin Marshall is one of Sydney’s finest top liners. She’s worked heavily in the electronic scene featuring on tracks with Paces, Poolclvb, and Set Mo, and had multiple releases in the top 10 Aria Charts. Erin loves pop music, and spends her time writing for developing and established artists. She’s performed at Splendour in the Grass, taken part in writing camps including ’50 songs in 5 days’, 120 publishing’s ‘Collabro’, and the Bali Song invitational where she has worked with some of the biggest names in the USA.

Studios 301: Tell us a little about what you do.

Over the last few years I have been working with electronic producers and artists as a topliner, which in a songwriting equation takes care of directing the lead melody and lyrical content of a song. I’m also a singer and a DJ.

Studios 301: What do you think about the prize package and the winners opportunity?

The prize package is like a fast pass ahead of the cue at a carnival ride. You get a direct introduction to all the people that can help support you in developing your career as a music artist; it’s a golden ticket. 301 have done a stellar job at putting together a prize that really covers every aspect of a potential release.

Studios 301: Why did you want to be involved?

It’s an exciting competition and there’s a great group of people involved who are fantastic at what they do. I’ve worked with some of them already and it’s always nice to re-collaborate and give back. It’s also a good opportunity to see what style is emerging from people who might not have had a look in yet; to hear something fresh.

To enter the Studios 301 Is It A Banger 2017 competition, please CLICK HERE